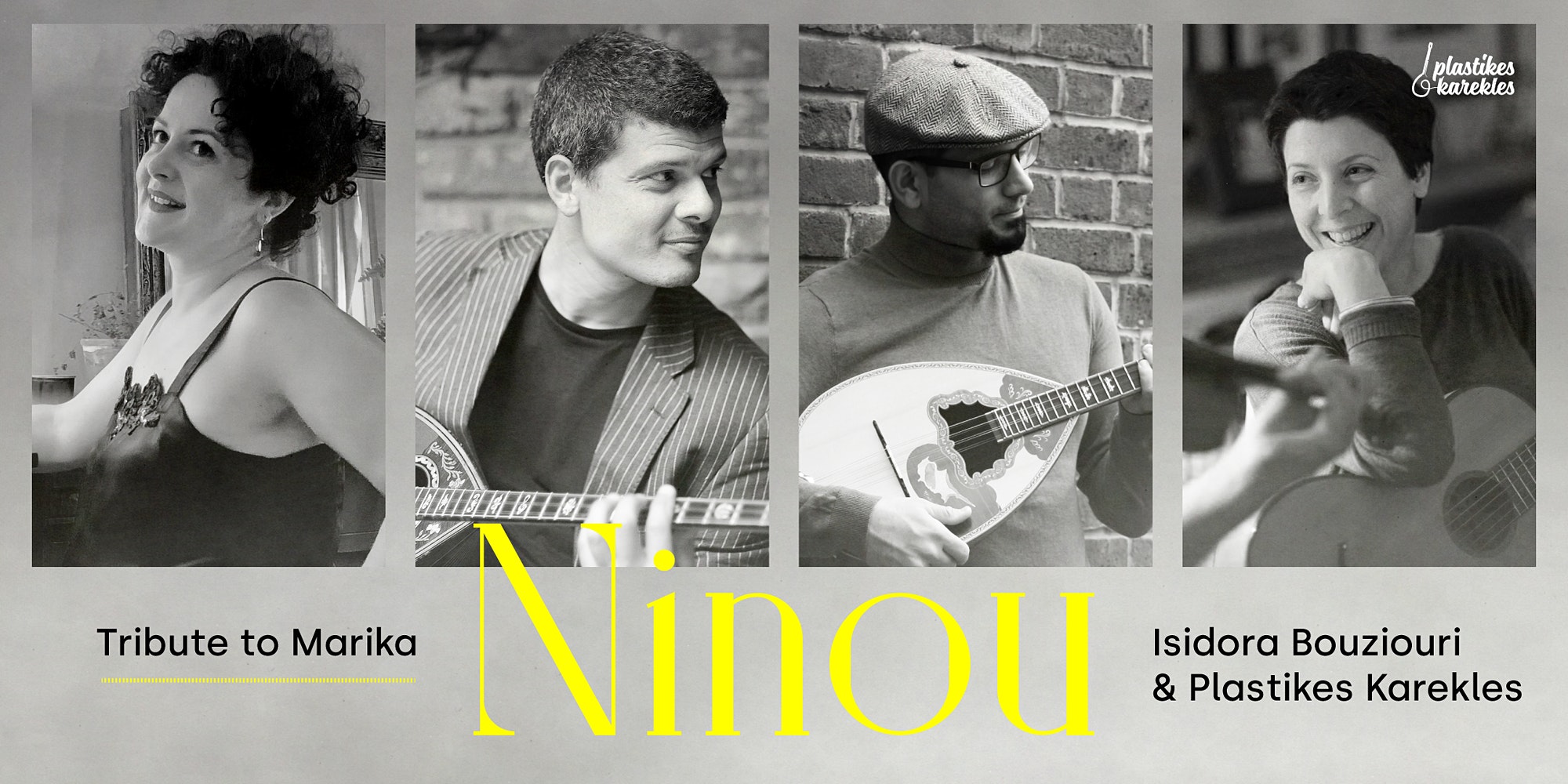 A tribute to one of Greece’s greatest and most iconic rebetiko female singers.

A TRIBUTE TO MARIKA NINOU
Isidora Bouziouri and Plasikes Karekles bow ” to Marika Ninou who engraved deep inside us the names of the gods of abjection and byzantine decadence with the dagger of her voice ” – Manos Hadjidakis .
Μarika Ninou reflects mid-20th century Greece and the historic transformations that marked her short life while she reinvents what singing is; unknowingly. She is born amidst Smyrna’s Catastrophy, she grows up in a refugee slum where rebetiko is born, she lives through wars, the reconstruction of post-war Greece and the transformation of Greek Society. She sings her life, her heart and her pain out; her sincere, almost pervasive singing makes her recordings sound like she’s then and there when you listen to them. She deconstructs and blends all the different styles and influences that enrich Greek music at the time and she changes how a woman sings for the generations to come. “With her singing, she illustrates the woman of urban, grass-root society of her time” (Yorgos Papadakis)
Isidora Bouziouri , a passionate and magnetic singer who lives every word that she sings, joins Plastikes Karekles, an eclectic fusion of international and Greek musicians with roots from traditional Greek folk to classical and jazz, to tell Marika’s story and sing her songs; the songs of a life that seem past but is defined by love and loss, good times and poverty, the underworld of outcasts and refugees and the new world of hope and prosperity.

“Plastikes Karekles represent a culture of reinvention as defiant and hopeful as the music itself.” –Song Lines magazine.
An eclectic fusion of international and Greek musicians with roots from traditional Greek folk to classical and jazz. The group is known for their own arrangements of music by Theodorakis, Hadjidakis and Xarhakos featuring a fusion of classical string instruments with Greek traditional ones. They are also very involved in the Rebetiko scene and haveestablished the longest running rebetiko series in london, “Rebet Asker, Greek Roots Series” at the Green Note which is now in its 10th year.The group have appeared at performances and festivals in Greece and elsewhere abroad. In the UK they have performed at King’s Place, Purcell Room, Royal Festival Hall, Royal Albert Hall, St David’s Hall as part of the Proms, as well as more intimate venues such as the Green Note, Vortex, London.
The musicians of Plastikes Karekles are also the founding members of the Rebetiko Carnival, festival and registered charity with Rebetiko music at its heart. They are dedicated to exposing this treasured music to as many people as possible.A very important part of Plastikes Karekles work is also education and outreach work. This has taken them to not only mainstream schools, but also special needs homes, hospitals and prisons throughout the UK.
Isidora Bouziouri, voice
Maria Tsirodimitri, guitar, voice
Pavlos Carvalho, bouzouki, voice
Michailis Spyridakis, bouzouki, baglama, voice