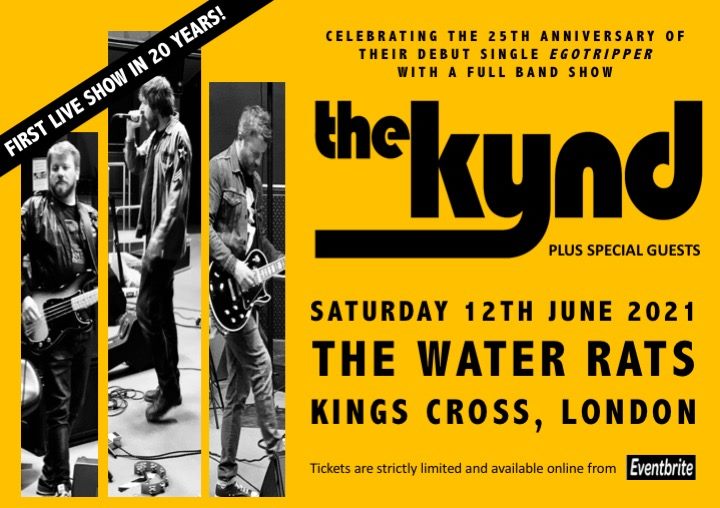 The Kynd return to Celebrate 25TH Anniversary with Live Date and New Music.

Limited ‘Priority Tickets’ available now. More to be released in the coming months based on government guidelines. 🎫 🎵

2021 sees the 25th Anniversary of The Kynd’s debut single, the Andy Bell produced ‘Egotripper’, and to mark the occasion the band are not only reforming for their first live show in 20 years but will also finally be releasing their ‘long lost’ 2nd album.

‘’It was an article in the first edition of Speakeasy and then a few plays on the likes of the Britpop Revival Show that started us talking about the band again.’’ says guitarist Danny Tipping ‘’We were taken aback by the positive reaction on social media and we started sketching out plans to somehow celebrate the anniversary of our first single. I thought the least we could do was put on a show but it kind of took on a life of its own.’’

‘’Like everyone we had some time on our hands through the Summer.” adds Danny’s twin brother Tristan, the band’s bass player. “At the time we broke up we were writing and recording for an album that was never finished. We started going through the tapes and we’d forgotten how many songs there were buried in those boxes and how good they were!”

Paul King, the band’s lead singer expands, “One of the best things about The Kynd reuniting in 2020 is that those songs that we had written, rehearsed and gigged years ago now finally have a home. From that point of view this new album feels a little bit like ‘musical archeology’, insofar as we had to dig through our archives and our memories to revisit these old songs, which we hadn’t thought about for 20 years.”

Tristan goes on, “The demos were in various stages, from complete recordings of songs that were already part of our live set at that point, to fragments of ideas we’d been working on in the studio. Playing them together again has been really exciting and we can’t wait for people to hear these tunes.’’

Paul sums it up: “We had these songs all stockpiled and ready to go and, in an alternate timeline, this is the album that we would’ve released in late 2000, early 2001 or thereabouts. That’s really exciting to me. To quote Robert Frost, it’s like a trip down the road not taken. A glimpse of the life not lived.”

The band’s first live show in 20 years will take place on Saturday 12th June 2021 at The Water Rats, Kings Cross, London. The legendary venue hosted Bob Dylan’s first UK show in 1962 and Oasis’s first public appearance in the capital back in 1994. ‘’It’s a really special venue and we always loved playing there.‘’ says Danny ‘’We’re going to pack it out and put on a great show!’’

For this leg of the journey, the band will be joined by their good friends Thomas Collinson and Fin Kenny. Danny and Tristan have worked with both multi-instrumentalist, producer and keyboard maestro Tom and power-house drummer and harmony singer Fin, on a range of projects over the years and are excited to be bringing them into the fold.

Amongst many other musical endeavours Fin played with one of The Kynd’s favourite live bands back in the day, the amazing psych-rock indie hipsters Spitfire who tore up the live scene back in the ’90’s.

The Kynd were part of the first wave of Britpop bands and, whilst the mainstream music press largely overlooked them, the band built a huge and enviable live following through relentless touring and support slots with the great and the good of the UK indie fraternity. By 1995 The Kynd were regulars on the Camden scene making numerous appearances at Blow Up, holding down a residency at the notorious Dublin Castle, headlining the Marquee and selling out the legendary 100 Club.

In 1996 the band signed to London based indie label MGR Records and released their debut single ‘Egotripper’ produced by Andy Bell (RIDE/Oasis) on their Go Go Girl imprint. The single was championed by long-time supporter and influential broadcaster Gary Crowley amongst others and saw the band dubbed ‘new indie hopefuls’ by the NME and ’Power Brit Pop!’ by the Melody Maker.

In early 2000, the band split up acrimoniously during studio sessions for a planned 2nd album.

If The Kynd are remembered, it’s as a genuinely exciting live act by those that saw them play.

Here’s a link to The Kynd’s: Spotify, You Tube, Twitter etc.: https://linktr.ee/TheKynd