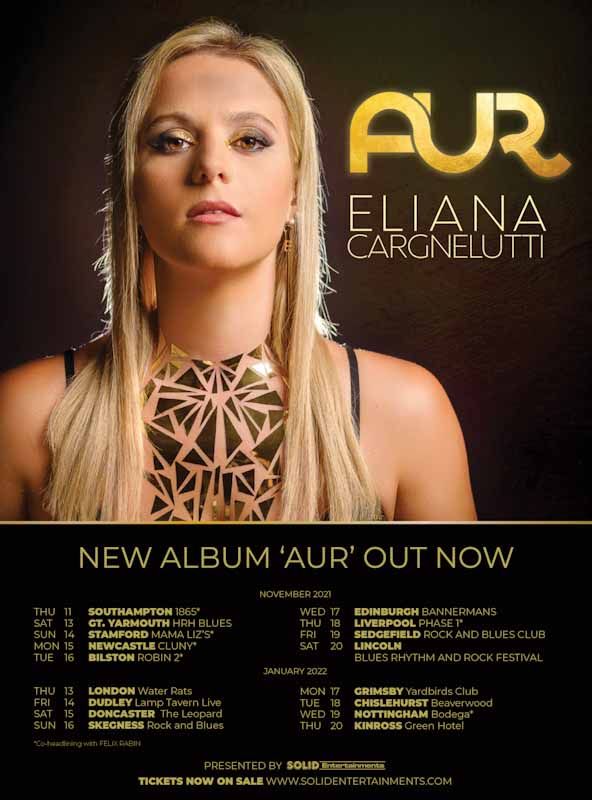 italian singer and guitarist, one of the rare real front women in the rock blues scene.

She plays a flavor of rock blues with a bit of everything in between: electric funk, mixed with pop and raw rock, tight blues grooves, blessed by her skills as an electric guitarist. Her sets truly have something for everyone. Eliana is well known in the blues scene thanks to her infectious persona.

Eliana was the winner of the “Blues Contest” in Pordenone, Italy, in 2010, she won the blues award as the “best new young artist” at the “Oscar del Blues” in Modena, Italy.

She did her part in the international Tour with the Blues Caravan project “Girls With Guitars” of Ruf Record label for all 2015. She was named one of the five “best female guitarists” in the rock blues scene at the American “Jimi Awards” in 2015 and she was nominated the 5th best female guitar player of the rock blues world by Blues E-news magazine.

Joe Bonamassa put Eliana’s “I’m a woman” on the list of the 8 recent songs absolutely to hear.

Eliana played with Deep Purple’s drummer, Ian Paice in a memorable sold out concert in Austria with the only all-female tribute to Deep Purple in the world, her “Strange Kind of women” project. Eliana has been on tour throughout 2019 from Europe to US with her rock blues quartet Eliana Cargnelutti Band and her album will be release in May 2021. In her new record there will be some important guests like Ana Popovìc and Eric Steckel from Los Angeles and other musicians such as Will Wilde, Reggie Hamilton, Francisca Nesti…

Eliana will tour Europe, especially Germany in the summer with blues Caravan and Uk in Autumn 2021 with her band.