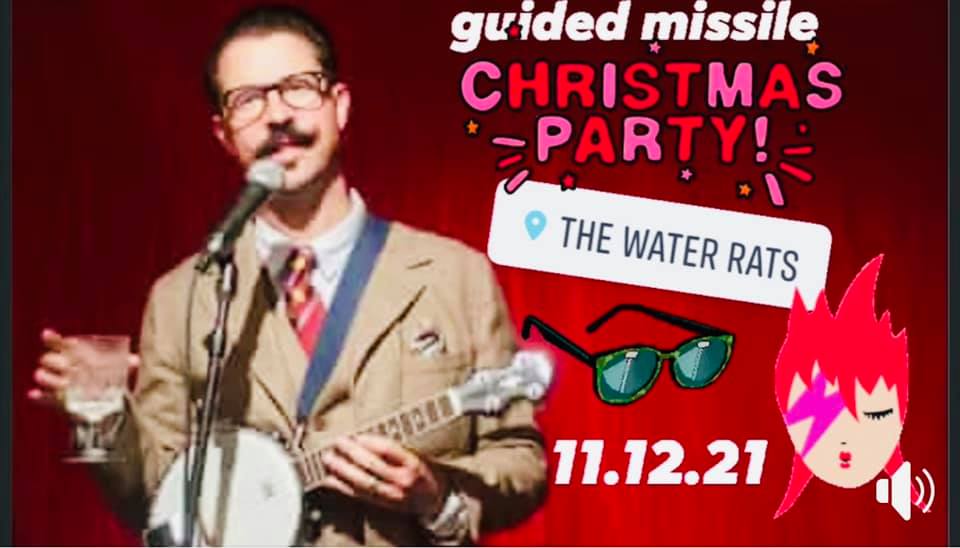 It’s Chriiiiiiistmaaaaaassssss!!!!
And we’ve got a great one this year. Our Christmas Party doubles as Mr B’s Festive Function. Tickets on sale NOW at wegottickets.com.

Guided Missile presents a top Christmassy line up including…

MR B THE GENTLEMAN RHYMER
Http://www.Gentlemanrhymer.com
Mr.B began his career in the summer of 2007 when he decided to bring elements of his previous incarnations (UK rapper, jump-up breaks producer, banjolele maverick and dandy) together and create a genre. Chap Hop.
Since then his beats, rhymes and manners, as well as songs about cricket, pipe smoking, high society and interfering with livestock, have garnered millions of views on YouTube and his media appearances have included Rapping for Jeremy Paxman on Newsnight, playing live on BBC Radio One for Rob Da Bank, Nick Grimshaw and Scott Mills, on Radio Two for Claudia Winkleman and Steve Lamacq, 6Music for Tom Robinson and Shaun Keaveny and for Zoe Ball on Sky Arts. He was also once the front page of the Wall Street Journal and was described by the Daily Mail as ‘Controversial’.
Mr B is top entertainment!

KEITH TOP OF THE POPS AND HIS MINOR UK INDIE CELEBRITY ALL-STAR BACKING BAND
KTOTPAHMUKCASBB (for short) formed at an Art Brut gig in New York City in 2006, after a support band dropped out, and Keith, who had produced Art Brut’s first two singles, played some of his songs with members of Art Brut. The band has subsequently featured a rotating line-up of musicians, with two rules – avoiding soundchecks and never having rehearsals. Keith et al have been described variously as “awesome” and “ear cancer”, but mostly “awesome”.

GLAM-ORGAN!
2nd glam band on the bill.. It is Christmas after all! Glam-Organ are not your everyday glam rock band as these guys play glam rock songs on organs.

Plus the usual thrills and spills of a Guided Missile Christmas Party and some special guests.

Please bring a mask and confirmation of double Covid vaccination to gain entry.