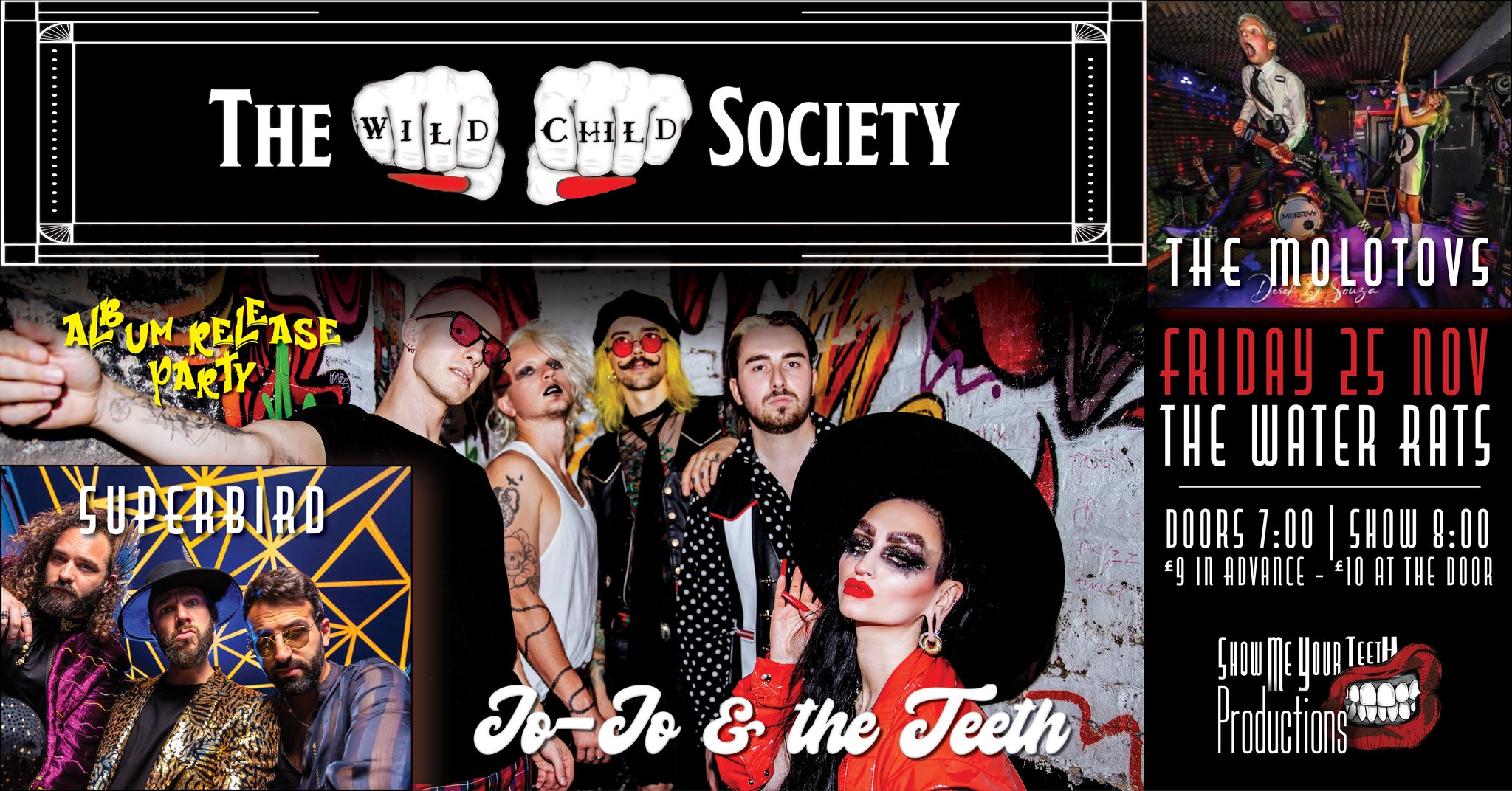 The Wild Child Society is ABSOLUTELY
PUMPED to announce that we are hosting Jo-Jo & The Teeth’s ALBUM RELEASE PARTY on November 25th at The Water Rats in Kings Cross!!!
We are even more excited to annouce this SMASHING LINE UP:
JO-JO & THE TEETH:
“One of the most promising and exciting new acts of recent years, Jo-Jo & The Teeth capture the spirit of early 70’s glam rock, the confrontational attitude of punk and they’re doing it with STYLE!” – Loud Enough? Magazine
A glamorous Art Rock rebirth forged by the collision of a Canadian powerduo and a fierce Isle of Wight Trio. This transatlantic marriage à-la Fleetwood Mac, blend and bend inspirations from every corner of music. A dark & moody forward driving sound, intimately rooted in good old fashioned guitar rock and roll. Jo-Jo & The Teeth conjures an arena sound and spectacle, woven together with velvety bluesy depths and moments of breezy pop sentiments.
LINKS:
https://www.jojoandtheteeth.com/
https://www.instagram.com/jojoandtheteeth/
https://www.youtube.com/channel/UCIeFIF9uXG56ZZ7xqFeA85Q
SUPERBIRD
A peacock inspired music sensation from London town hosted by Joe, Alex & Freddy; a lustrous rock/funk power-trio on a mission to re-energize the world in a mischievous fashion.
Concocting a sound that echoes Living Colour, Red Hot Chili Peppers, Jellyfish & Prince! The boys were recently crowned BBC Introducing ‘Band of the Year’ and with a string of live TV performances attached to their belts, Superbird are all fired up and gaining unstoppable momentum.
LINKS:
https://www.wearesuperbird.com/
https://www.instagram.com/wearesuperbird/
https://www.youtube.com/wearesuperbird
THE MOLOTOVS:
The Molotovs never fail to create a buzz wherever they go with performances that leave nothing in the dressing room. BritPop/PostPunk/Indie sounds merge to create sharp, punchy originals that songwriter and guitarist Mathew delivers with unbelievable swagger – think Wilko meets young Weller. Bassist Issey Carts bops and struts in pure rock-chick style whilst drummer Ice drives the beat home with a ferocity Moon would smile down on.
Name-checked by Billie Joe Armstrong in front of 90,000 people and described by Pete Doherty as “fucking ace!” when they supported The Libertines last year, you’ll want to see this new band and be part of their explosive journey. Check out The Molotovs and feel excited about supporting the next generation of British musicians destined to leave their mark.
LINKS:
https://www.youtube.com/channel/UC6RxrgbqQIsrMe8qanAi3pw
https://www.instagram.com/themolotovs