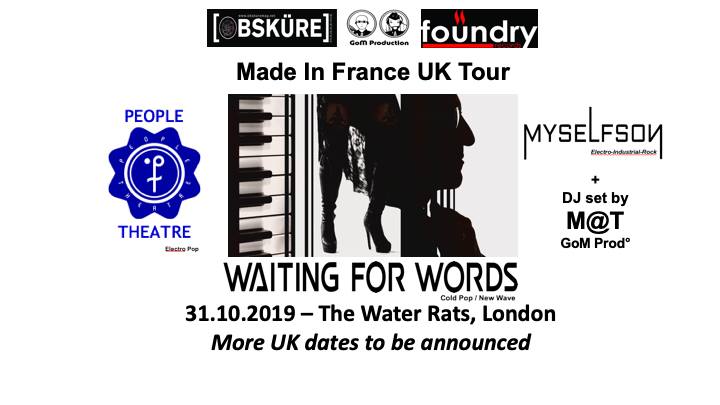 A very special HALLOWEEN New Wave / Synth Party at The Water Rats for sure!

3 LIve acts + a DJ from France touring UK will end up their serie of shows in London.
Press Release
Waiting For Words back in UK after 8 years with a French bands caravan!
From 2005 to 2011, the French cult synthpop act WAITING FOR WORDS toured UK several times, visiting Coventry, Leamington, Birmingham, Leicester, Nuneaton or London, including some cult venues such as The Underworld or The Spa, building up a strong reputation of solid performers, mixing video screenings and powerful electronic rhythms (with an impressive live drummer), catchy pop tunes and a stunning lead performer.

2 intensive years touring the world followed by changes in the line-up, a cover album to celebrate the band’s 25th anniversary and most of all, 2 more years spent recording the critically acclaimed new album, “Egocracy”, took the band away from UK for quite sometimes.

After Greece, France, planned gigs in Germany and Belgium, it was about time for WAITING FOR WORDS’ EGOCRACY TOUR to hit UK… and this time, they bring some other bands in their tour bus for a “Foundry Records’ French Touch UK Tour”.

And in a more industrial electro rock style, the recently signed MyselfsonN just released a critically acclaimed debut album, “Memory Park”. The duet spent most of the last decade touring in France, shaping their sound and sonic identity and the result with this album is stunning.