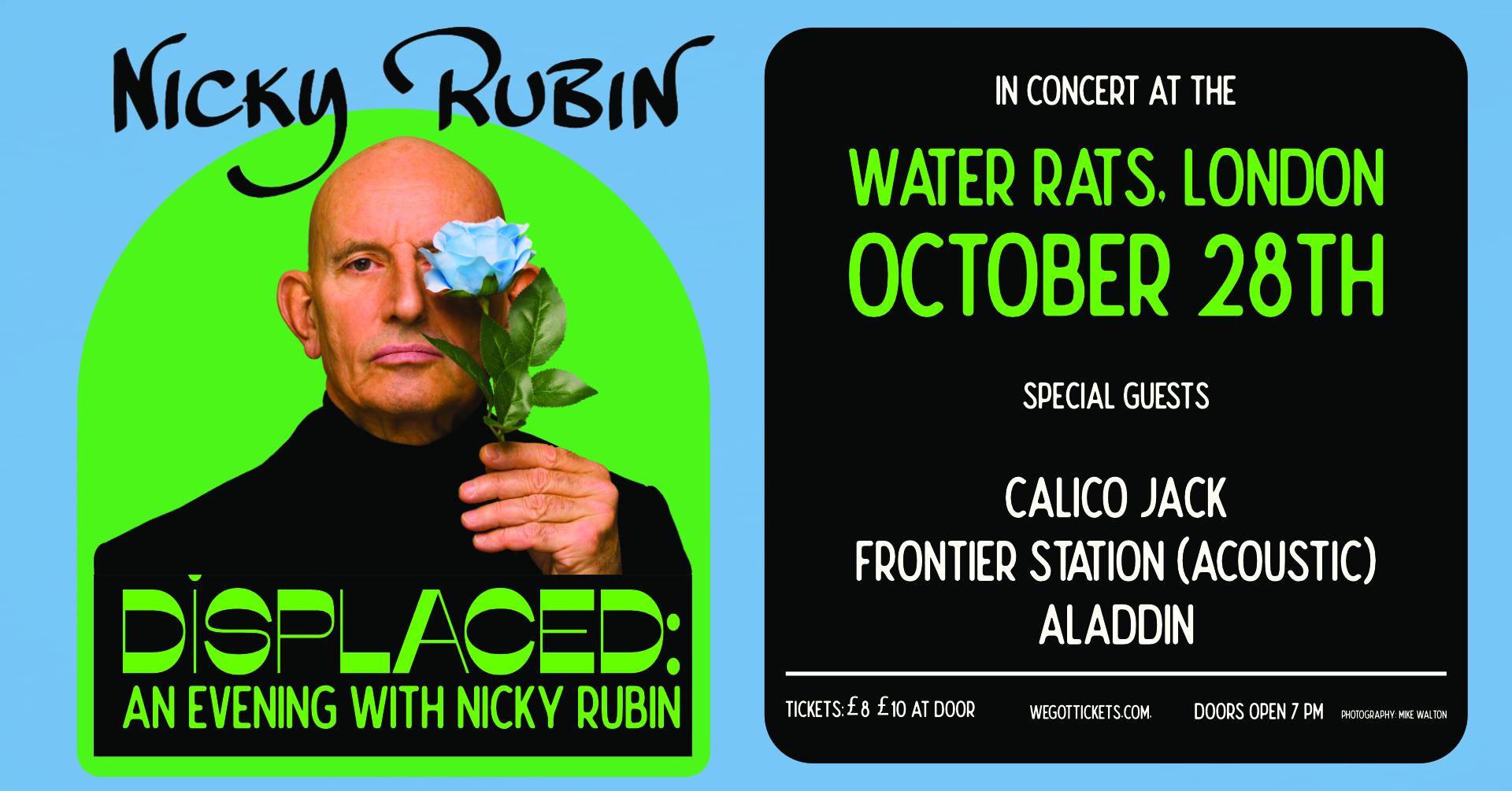 An evening of eclectic music ranging from Americana to Rock to traditional Lebanese music. This is an annual event at Water Rats hosted by the charismatic Nicky Rubin and his band.
———-
NICKY RUBIN
www.facebook.com/nickyrubinmusic
Nicky Rubin is an enigmatic songwriter whose musical influences draw from iconic heavyweights such as The Beatles, The Rolling Stones, U2 and Jimi Hendrix.
As a teenager running from the melancholic skies of Manchester, Nicky hitchhiked to the hills of Afghanistan, the Indian sub-continent and beyond, where he was given a beat up old guitar, resulting in his first songs being written on the streets of Tehran.
Many moons, miles, tongues, capitals, affairs, recordings and gigs later, Nicky is now based in London. A seasoned veteran of the stage, Nicky’s life has been devoted to performing his emotionally charged songs around the world.
With an engaging and fast growing fanbase (250,000+ streams in the past 12 months), keep an eye on Nicky Rubin as ‘one to watch’.
———-
CALICO JACK
www.facebook.com/officialcalicojack
Calico Jack are a funk-pop group from London UK, drawing on the grooves of 70s funk & soul and the catchy melodies of modern indie rock and pop. The multi-instrumentalist trio create guitar-led, danceable funk with an ear for powerful vocal lines and grooving rhythms.
The trio of Will Lord (vocals, bass, keyboards), Kyle DM (guitars, synthesisers, production), and Luke Piper (drums, keyboards) released their first EP, Pirate Radio, in 2016. Taking a sharp turn into the direction of funk, their second EP followed in 2017, How To Feel Right, featuring the infectious single The Groove.
Known for their high-energy live shows, the group have gigged extensively to crowds across London, even playing from a bus roof to an audience of over 60,000 at the 2019 Student Climate Strike in Parliament Square.
After two successful UK tours in the summers of 2018 and 19, the group focused on writing and recording new material. Post-lockdown, new music is sure to be on the horizon…
———-
FRONTIER STATION
www.facebook.com/frontierstation
Frontier Station are a London-based rock band with an old-time twist. Blending the lavish lyricism of Bruce Springsteen, the multiple vocals of Fleetwood Mac, and the cinematic soundscape of The Cure, they’ve a rousing sound with a hard storyteller’s edge. Their music drenched in harmonies, with guitars that cascade like distant foghorns and drums that pound like locomotive pistons. They spin tales of miners, gargoyles, immortals and steeple jacks, in the shell of a Victorian steelworks by the glow of a flickering gaslamp.
Formed in 2018 by guitarist Ben Leich and vocalist Matt George Lovett, they’ve been gigging around London since then with the twin powers of intricate songwriting and theatrical live shows. Drummer Kat Miles, vocalist Esther Shelley, and bassist Liam Garrett complete the line up.
———-
ALADDIN
Traditional Lebanese Oud player.