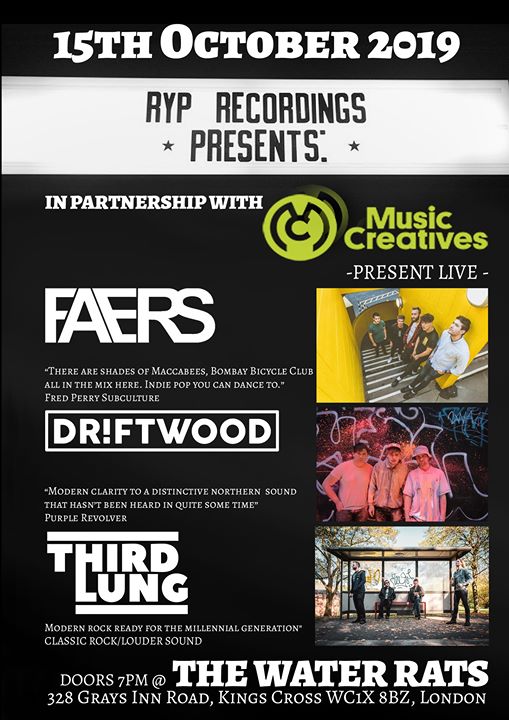 RYP Recordings have partnered with Music creatives to present three of their new acts LIVE…..

THIS IS A VERY LIMITED TICKET SHOW!!!

Hailing from North West London, FAERS emerge from a local scene that features talent such as BLOXX, Honey Lung and Sports Team. They draw influence from WU LYF, Foals and The National.

The London-based five-piece have spent the last year writing in Gothenburg (Sweden) and Hamburg (Germany), where they found sonic and lyrical inspiration in their surroundings:

“Death sails was inspired by our time in Gothenburg and Hamburg. Both are port cities, and every night boats sail off into the darkness and there’s no way of finding out how their journey ended.”

“In a way, I felt that all people are passing ships. Occasionally, we cross courses, but ultimately we’re sailing towards the unknowable destinations ahead of us.”

They may come from the Dark Side, well Preston actually but the three lovable lads who make up DR!FTWOOD, Hugh Aitchison, Nathan Walker & Marcus Maddock are one of the tightest bands on the circuit. This doesn’t just apply to opening their wallets but also to their intense musicianship when on stage. With all three being great musicians and with sublime lead vocals from Hugh, their live performances are not to be missed, they really are quite exceptional. The guys have been together for a couple of years, constantly honing their sound and their craft whilst releasing their music. With a pretty eclectic list of influencers, from the likes of 1975, Ed Sheeran, LANY through to The Killers, they have created a lush sounding, commercial slanted, pop rock sound which has been further developed and enhanced by working with top Producer and raconteur, Michael Smith at RYP Recordings. Now signed up by a leading Management Company in London, DR!FTWOOD are planning a lot more gigs and have already played at the highly prestigious GREAT ESCAPE FESTIVAL in Brighton.

THIRD LUNG, a band more and more people are getting familiar with, following a continuous run of gigs across the UK and their highly acclaimed EP’s and singles. This Reading based Rock band, fronted by Songwriter and lead Vocalist Tom Farrelly, Bassist Rob Jacques, Guitarist/Songwriter/Vocalist Camilla (Cams) Jurasek and drummer Sam Waugh.

Anyone who’s heard or seen THIRD LUNG will have been immediately impressed by their Anthemic songs, like SISTER SINNER, SOONER OR LATER, BREAKING LATE, SPEAK YOUR MIND etc. The band are irresistible live, their hard sound brilliantly crafted into relentless hooks and melodies which gives them a commercial appeal coupled with a sublime rock edge. They manage to engage even the most diverse of audiences with their ridiculously tight playing, brilliant songs and the staggering lead vocals of Tom (a real singers singer).

Songwriting wise they just gets better and better, lyrically concise always hook driven and invariably combined with a hidden punch. Songs that will stand the test of time and many that are already proving to be perennial favourites.

Their releases have received many compliments, from the likes of Radio 6 Legend, DJ Steve Lamacq and constant support from the BBC Introducing team, alongside numerous radio stations in not only the UK but across the World. If you need evidence of their intensely satisfying music, check out the EP’s ‘BREAKING LATE and “SOONER OR LATER”, both are testament to their profound, superbly crafted songwriting, sublime vocals and overall performance.

The band work relentlessly on new material, demos are being laid down constantly before they go into the studio with acclaimed Producer Michael Smith (RYP) and they continue to build strong relationships with people they work with, both in the studio and on the road.

Their attitude and unrelenting grafting on the road, in the studio, in rehearsals is ensuring that their deep rooted passion and craft, continues to draw in listeners far and wide. If you get the chance, go check THIRD LUNG live, you will not be disappointed.