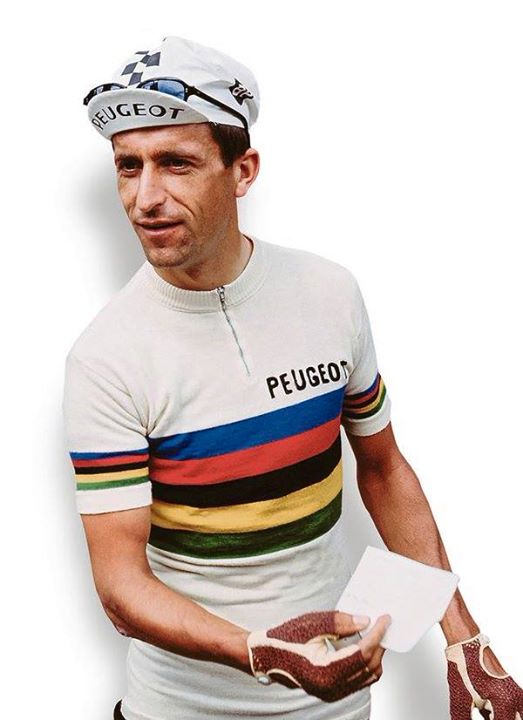 We are delighted to welcome Chris Sidwells to the Water Rats Theatre, to talk about his uncle, Tom Simpson.

As well as discussing the life of Britain’s greatest-ever cyclist, Chris will be bringing his world champion jersey and the bike on which Simpson won Paris-Nice in 1967, beating his team-mate Eddy Merckx.

Chris will be in conversation with former Procycling magazine writer Duncan Steer.

A miner’s son from Nottinghamshire, Tom Simpson made the trip to Europe on his own, as a 21-year old, with £100 and two bikes, looking to break into professional racing.

A year later, he made his Tour de France debut. Simpson’s story inspired and captured the imaginations of cycling and general sports fans in both France and the UK. In 1965, he became the first British rider to win the road world championships and was voted BBC Sports Personality of the Year.

Chris Sidwells, a longtime contributor to Cycling Weekly, Cycle Sport and many other publications, will be selling and signing copies of ‘Cycling Legends 01 Tom Simpson’, his new biography, that reveals the full story of Simpson’s life, complete with input from team-mates, led by Eddy Merckx.

Chris is keen to present Tom Simpson’s inspirational story, a story that is often overshadowed by his tragic death during the 1967 Tour de France.

The Water Rats Theatre is a historic venue that is home to the showbiz charity, the Grand Order of the Waters Rats. There is a bar area and a dinner menu, so please arrive early to take full advantage. The show will start at 7.30. After the interval, there will be the chance to ask Chris your own questions.

Chris is selling out venues around the country and this is his first appearance in central London. Our nights with Chris in Putney and Brighton were tremendously evocative, with Chris’ stories and family memories ranging in mood from heartbreaking to inspiring – and plenty of funny moments in between. Do please book early to secure your place.