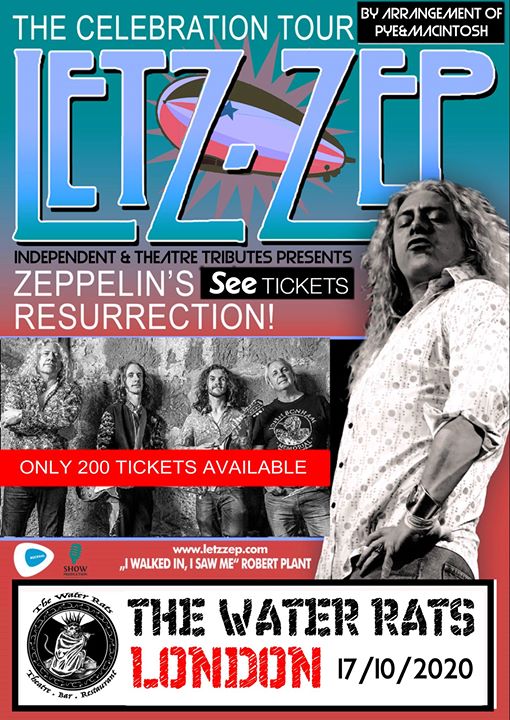 That was the comment in Q magazine by Robert Plant himself on the Letz Zep gig he attended in London, he continued to say that it is like watching himself on stage! Robert also commented that the physical similarity between himself and Letz Zep vocalist Billy Kulke is ‘Spooky’.

Plant also gave the band his blessing when interviewed on VH1 TV show ‘In The Round’.

An achievement marked by the authoritative Ticketmaster organisation when they awarded the band ‘The Most Popular’ and ‘The Most Highly Rated’ tribute to Led Zeppelin today.

Letz Zep are the best known and most successful tribute to Led Zeppelin and have written a page into the history of tribute bands with their achievements.

Jimmy Page has also attended a gig by Letz Zep when he invited he band to join him after the show. He complimented the band on the performance.

”That was ambitious, but you pulled it off”, said Jimmy about the set Letz Zep performed in his presence.
”I’ve been hearing a lot of good things about your band, we have a lot of mutual friends so stay in touch” Jimmy continued ”You have captured the spirit of Led Zeppelin concerts, you really are very, very good”.

Letz Zep were invited to the 02 reunion show and also to the premiere for the DVD ‘Celebration Day’ with Led Zeppelin in Hammersmith, London.

Letz Zep were honoured and proud to perform a headline set at the ‘John Bonham – A Celebration’ concert. To celebrate the life and legacy of the great John Bonham and to coincide with the unveiling of a bronze statue to the legendary percussionist in his home-town of Redditch.

Warner music themselves name Letz Zep as ‘Europe’s best tribute to Led Zeppelin’ and they should know, being the record lable for Led Zeppelin themselves.

Letz Zep currently have eight live albums and 2 DVDs available, distributed via Sony Music to over one million listeners worldwide. There are also two books on the band available worldwide on Amazon.

Letz Zep is formed by talented and respected musicians who are all true Zep fans with a strong musical pedigree. Its members have toured with artist such as Ozzy Osbourne, Roger Daltrey, Debbie Bonham, Guy Chambers, Steve Hackett, Dr Feelgood, Saxon and Uriah Heep, to name but a few.

Described in Kerrang! Magazine as ‘Better than a Led Zeppelin Re-union’, all four members possess the considerable musical ability required to a completely convincing recreation of Led Zeppelin in their prime, complete with the ‘tight but loose’ trademark element so essential to the raw excitement of a Led Zeppelin concert.

Rub your eyes in wonder at the territories in which British band Letz Zep perform. France, Spain, Germany, Russia, Italy, Sweden, Finland, Sweden, Brazil, Mexico, Venezuela, Australia, New Zealand the list goes on…. and on! Taking in over 50 countries on four continents. Bringing the music of Led Zeppelin to new generations and confirming Letz Zep a truly global act.

Letz Zep have appeared on over 100 festivals worldwide including Viva Latino in Mexico with Jane’s Addiction and are the first and only tribute band to ever appear at the prestigious Wacken Open Air festival in Germany.

Letz Zep cover the entire recording career of Led Zeppelin. From the haunting melody of ‘Kashmir’ to the rockers such as ‘Whole Lotta Love and ‘Immigrant Song’. The folksy acoustics such as ‘Going to California’ and ‘Babe I’m Gonna Leave You’ to the classic ‘Stairway to Heaven’ a concert by Letz Zep bring you an evening with the music of the greatest rock band EVER! Led Zeppelin.
A not to be missed night for all fans of the genre.

Letz Zep are not an exercise in nostalgia but a heart rendering cry against complacency and forgetfulness. Faithfully recreating the sights and sounds of Led Zeppelin at their awesome best.

From humble beginnings on the London pub scene Letz Zep now perform on the biggest stages in the world.
Popular with both the public and promoters alike, Letz Zep have performed at over 50 major festivals worldwide, many as headline act!

Appearing on the same bill as artists such as Jane’s Addiction, Cheap Trick, The Chemical Brothers, Bad Company, Ritchie Blackmore, Jethro Tull, Skid Row, Accept and Motorhead to name but a few.
Bringing the music of Led Zeppelin to new generations of audience, and confirming Letz Zep as the number one tribute to Led Zeppelin.

What people are saying about Letz Zep:

‘That was ambitious but you pulled it off, stay in touch’ – Jimmy Page

‘I’ve heard a lot of good things about you, you’re the band Robert went to see, good luck with it’ – John Paul Jones

‘There are good tribute bands and there are bad tribute bands, then there is Letz Zep, who are monsters an play in a different league to the rest’ – Metal Portal Spain.

‘You can’t have too much of a good thing, here’s Letz Zep’ – Jeremy Paxman BBC2 Newsnight.

‘If you closed your eyes you really could imagine the real Page and Plant up there, and if you opened them the illusion didn’t really go away. The lead singer even seemed to have a length of authentic hosepipe down his trousers’ – Jeremy Clarkson The Sunday Times.

‘Plant is not adverse to the odd moment of nostalgia. He’s personally checked out a Letz Zep concert, They were once threatened with legal action over using a photo of Plant on posters, before Zeppelins management realised it was a picture of Letz Zep’s own singer Billy Kulke’ – Virgin Media News.

‘Better than a Zeppelin re-union’ Kerrang!

‘The best tribute to the great Led Zeppelin’ – Kerrang! Spain.

‘You know it isn’t the real thing, but still a lot of fun’ – James May Top Gear

‘A staggering moment in the footsteps of Page and Plant, We have talked about it but we are telling you again, Letz Zep are the best!’ – LACN France.

‘Closer to the original is not possible’ Made in Music Amsterdam.

‘This is the closest you are ever likely to see or hear’ Janick Gers, Iron Maiden.

‘it is rare to see a band of this quality, it’s the closest most people will ever get to a Led Zeppelin show. Anyone who is sceptical about tribute acts will definitely be forced to have rethink after hearing what these guys can do’ Julia Collins, This is Kent

‘I have heard so many good things about your band I have to come your next gig’ – Fearne Cotton, TV presenter.

‘Two hours of precision, technique, nostalgia, passion and all the adjectives that you want to add. A magnificent, magnificent concert’ Antonio Ramero, Planeto Sonero.

‘There’s a band on tour at the moment called Letz Zep, they are fantastic and I recommend you go see them’ – Jonathan Ross, BBC Radio 2.

‘It should be mandatory for every Zep fan have a Letz Zep concert date scheduled in their calendar’ – Saarbrucken News, Germany.

‘Letz Zep are almost Led Zeppelin… this band has proven to be the worlds best’ Hard Rock mag, Hungary.

‘Not only do Letz Zep deliver onstage, they also recreate their more notorious backstage antics too’ – Amsterdam Weekly.

‘I may now have seen the next best thing to Led Zeppelin’ – Peter Malkin The Peterborough Telegragh.

‘This is the nearest to the real thing you’re gonna get’ – Stockport Times.

‘Letz Zep are truly astonishing and are masters of the art of delivering live music the way it should be done, with feeling, integrity and talent’ – Gary Robinson, Peterborough Herald.

‘No matter how little Led Zeppelin you may have listened to, this concert is one not to miss. Not just for the music, but for the excitement, the atmosphere and the whole aura surrounding these excellent performers onstage’ – The Lynn News.

‘Letz Zep stormed their way through a two hour set, churning out the classics all played to perfection, I won’t leave the Astor Theatre on such a high again’ Chris Nolan, East Kent Mercury.

‘There are a lot of tribute bands out there bit LEtz Zep are something else. They really are the closest to the original and long may they continue keeping this remarkable music alive’ Micheal Broomhead, Derbyshire Times.

‘Better than this you will not encounter, it is not difficult to understand why Letz Zep are widely considered the best tribute to Led Zeppelin’ – Blues Magazine Holland

‘They truly are the best Zeppelin tribute band there is, and I risk a lynching, but dare I say even better than Led Zeppelin in 2007!’ – Mariskal Rock, Spain.

‘How is it possible to be so good?’Du Monde, France.

‘The most glorious music, thank you Letz Zep’ – Jevitron, Spain.

‘As Plant has put the kibosh on a Zeppelin re-union, Letz Zep is the next best thing’ – Brighton Argus.

‘From the bottom of my heart Letz Zep I thank you’ Lynn News.
Website By: Kenji Sakai